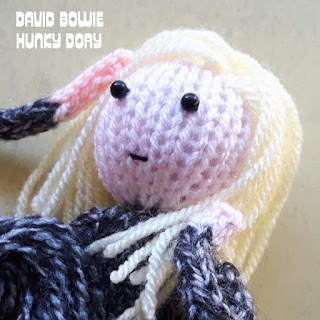 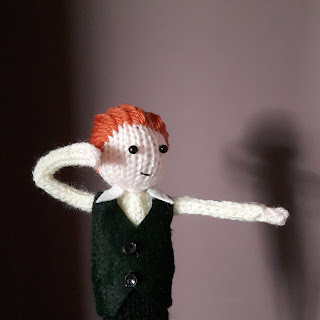 I’m currently knitting a series of David Bowie incarnations to commemorate what would have been his 70th birthday on the 8th January, and the first anniversary of his death on the 10th January. Here’s my knitted version of the Hunky Dory LP cover, and the Thin White Duke. 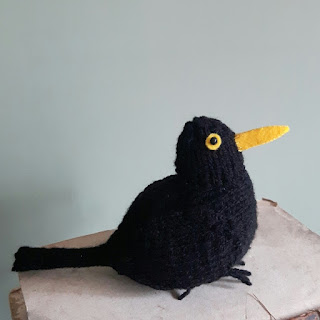 This little knitted blackbirds is still one of my favourites to knit – the pattern is in my book Knitted Birds, if you fancy making one yourself. At this time of year the blackbirds in my garden seem more friendly than usual and come right up to my feet some days, when I go out to top up the bird feeders. I throw them a handful of suet pieces onto the grass and then have to wait for them to finish, otherwise the seagulls come and eat it. 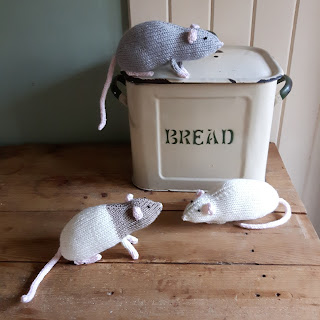 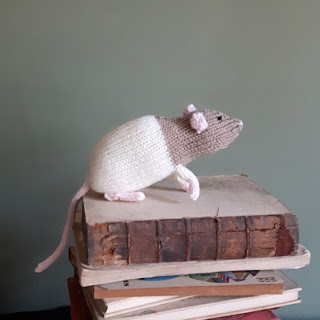 Eek! The kitchen has been invaded by knitted rats! Don’t worry, they are all very friendly. They are cuddly rats that you can knit up using oddments of DK yarn – and they are knitted flat on two needles so are a nice, easy knit. The pattern is in my Etsy shop, and also available as a Ravelry download. 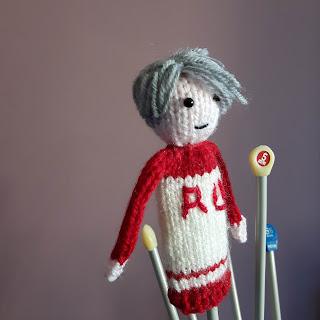 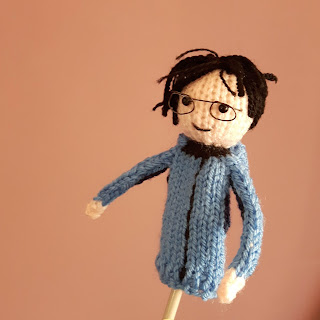 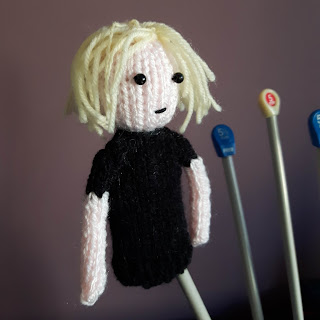 More finger puppets! These Yuri on Ice ones were a custom Etsy order – Viktor Nikiforov, Yuri Katsuki and Yuri Plisetsky. 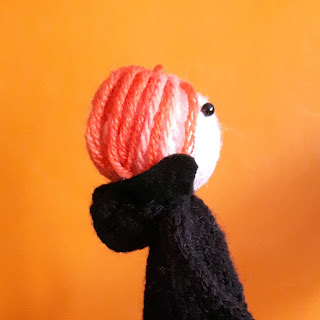 I have decided to slowly work my way through trying to knit David Bowie in all his album cover incarnations, and Low is a good place to start. This Bowie is a finger puppet – I’ve been enjoying playing around with knitted finger puppets this year and will definitely make some more Bowie puppets soon. If you fancy giving Low Bowie a home, there should be one in my Etsy shop. 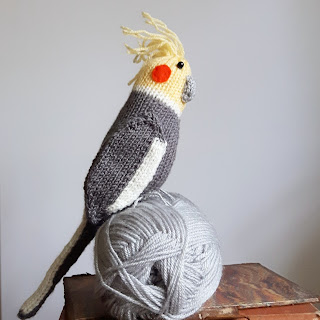 Another member of the parrot family – I’m definitely enjoying knitting parrots at the moment! This little cockatiel is currently for sale in my Etsy shop, it is hand knitted from my own pattern. If he has sold, please do get in touch, and I may be able to knit you another as a custom order. 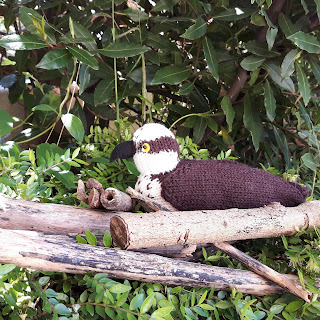 You may recall that I knitted Monty, the osprey from the Dyfi Osprey Project, in my book Knitted Birds. Knitted Monty stands upright, and he has wire feet. Well, here is an adaptation of the same pattern, so you can knit Glesni, his partner, in a nesting pose (which is what she is currently doing if you check the Dyfi Osprey Project live stream at the time I’m writing this!).

To make Glesni, use a 4.5mm pair of needles rather than the 4mm pair recommended for Monty. This will make Glesni slightly larger. Knit the same body and head parts from the Monty pattern, stuff, and then lie the body down and sew the head into position as seen in the photos. Knit four wings, and then take two of them, pin them together with the wrong sides together, and oversew around the edges using dark brown DK yarn. This creates a double-sided wing which will stand up better than a single one. Repeat with the other two wing pieces and then sew both wings into position on either side of the body – don’t sew the last third of the wing onto the body. Create eyes and beak as instructed in the Monty pattern. 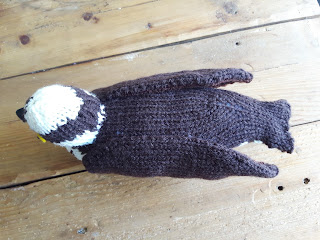 Good luck Glesni and Monty! Here’s to a summer of plentiful fish, and healthy chicks. 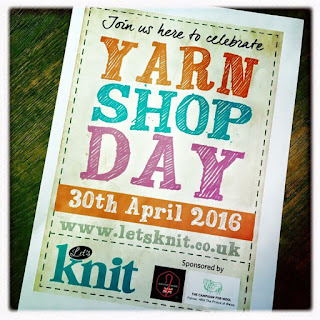 Come along and meet me and the knitted birds at Seeded in Southsea, Hampshire, and celebrate Yarn Shop Day! Yarn Shop Day is organised each year by Let’s Knit magazine and it’s a chance to connect and enjoy your local yarn shop – if you’re not near Southsea, check out Let’s Knit magazine’s listings of participating shops. There’s lots of special events, giveaways, workshops and free patterns (and cake) going on in local yarn shops all over the country. Anyway – I will be at Seeded from 11am – 3pm with the knitted birds and I will be signing copies of my book. There’ll be lots of other things going on at Seeded too – what better excuse to visit this fantastic, friendly yarn shop! 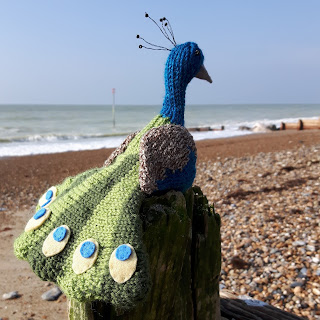 Here’s another of my new designs – a knitted peacock. It’s not often that you spot a peacock on Worthing beach. The seagulls didn’t quite know what to make of it. 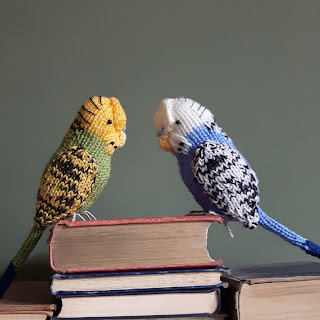 I’ve been hard at work designing some new bird knitting patterns, this time exploring the exotic birds of the world. There are so many to choose from! These little knitted budgies are the latest off my needles – I’m hoping to make some more to add to my Etsy shop soon.